When Amy Berman of New York City was diagnosed with stage 4 inflammatory breast cancer, she learned that only a small percentage of people with her diagnosis survive to five years. That was five-and-a-half years ago, and Amy is still here. In fact, she is as active and fulfilled as she has ever been.  She credits palliative care with keeping her healthy and lively as she deals with her illness. This is a story about making difficult but informed decisions. This is a story about finding happiness in the moment.

This is Amy’s palliative care story.

A lover of art, photography, travel and fun moments at home with family, Amy has always been an active person. In October 2010, she noticed a red spot on her right breast and immediately went to her doctor. Based on the appearance of the growth, Amy’s medical team was concerned that it was breast cancer. They then took a full scan, which confirmed the cancer and its stage.

“It was a devastating thing to hear. And it was surprising because I still felt great. If I had to put a penny down as a bet, I would have gone completely all in that they had caught it early. I would have never guessed it was stage 4,” says Amy.

For Amy’s diagnosis of inflammatory breast cancer—a rare disease—the numbers told her that 20 percent or less of people with her condition survive five years. Given this news, Amy knew she had some really tough choices to make. Because the cancer was terminal, Amy started to approach her decision from all angles. She looked into different treatment options such as chemotherapy and immunotherapy and also considered forgoing any treatment. These were not easy choices but raised important questions.

The first thing Amy did was ask her oncologist about all the options available. Her oncologist, who was trained in palliative care communication skills, worked with Amy and her family to match her treatment options to her life goals.

“When someone has palliative care training, one of the most important things they do for you is try to figure out what’s important to you based on where you are with your health and what you’re trying to accomplish,” says Amy.

Palliative care is specialized medical care for people with serious illness. It focuses on providing relief from the symptoms and stress of the disease. The goal is to improve quality of life for both the patient and the family.

For Amy, remaining an active person and continuing to work were important. After these discussions and getting a second opinion from another oncologist, Amy decided to have her pain and stress managed by palliative care and not to undergo treatments for the cancer itself that may have added side effects and increased hospitalizations. After making her decision, she felt that palliative care had given her a sense of control during this difficult time.

Palliative Care is Not One-Size-Fits-All

While choosing to forego aggressive treatment while receiving palliative care may have been what Amy wanted, it doesn’t mean that this decision is right for everyone. Amy made her choice based on being actively-engaged in the discussion.

“If people aren’t participating in these conversations and decisions around their own health, they’re going to be guaranteed only to get the care and treatment that someone else thinks they should get,” says Amy. “My team advised me along the way, but they advised me on this after they asked me what I wanted,” says Amy.

Other patients may choose to continue receiving treatment for their illnesses. Those patients can still work with palliative care teams as they deal with the emotional and physical symptoms that may arise along the way. Palliative care teams often include doctors, nurses, social workers and chaplains who work with patients regardless of what kind of care decisions they make.

With serious illness, there are often new challenges to face. When the cancer—which had spread to Amy’s lower back—began to cause her discomfort, Amy turned to the palliative care team to help manage her pain and symptoms. They recommended radiating the painful areas, which worked well to relieve the discomfort. They then worked with Amy on a plan for if and when the pain or medication caused additional symptoms or side effects.

“Just having a plan in place made such a difference,” says Amy. “Having that support means that when I travel or go on a business trip, if something goes wrong, I’m prepared. I feel so well supported.”

The palliative care team is also there to help Amy and her loved ones deal with the emotional toll a serious illness can take. 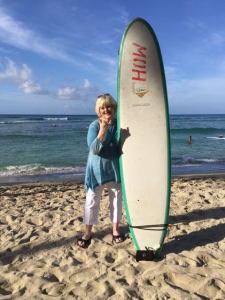 A Baccalaureate Prepared Nurse and Senior Program Officer at the John A. Hartford Foundation, Amy continues to work full time. She also continues to travel. Since her diagnosis, she has climbed the Great Wall of China, ridden a camel in the Jordanian desert, jet skied around the Statue of Liberty, taken up the new hobby of photographing graffiti art. Amy also still works full time at the John A. Hartford Foundation.

“Being seriously ill is a terrible thing. But, if you can imagine living well in the face of serious illness, it’s such a special thing. I’ve had the benefit of palliative care to do just that. I’m living the life I want to live,” says Amy.