Navigating the uncertain waters of high school and college can be challenging for anyone. Imagine spending those pivotal years with a serious illness.In the face of chronic pain and discomfort, constant doctor’s visits and hospitalizations and the stress that comes with giving up so much at such a young age, her goal is simple: to live the best life possible.

This is her palliative care story.

Aly has always been the type to want to do everything to her fullest abilities. That was apparent back before she ever dealt with an illness.

“I’ve always been the Type A personality,” said Aly. “That meant taking all advanced courses in high school and being in band, and I had a part-time job at Staples and was very involved in my church youth group. So it really was just this constant go, go, go.”

In high school, after feeling soreness and pain for an extended period of time, Aly was diagnosed with Juvenile Arthritis. Despite receiving treatment, her symptoms worsened. She began to lose significant weight and started to experience severe stomach issues. Just as she was beginning her freshman year at the University of Iowa, she received the diagnosis of Eosinophilic Gastroenteropathy, a condition that causes white blood cells to build up in the gastro-intestinal system and the blood.

Determined to live an active and normal life, Aly kept up with all of her classes, made many new friends and participated in the University of Iowa marching band. Towards the end of her last semester of freshman year, however, the symptoms became too much to handle. The stomach issues continued to get worse despite her close attention to her diet, and eventually she had to take her meals through a feeding tube which she administered herself. Eventually, she was admitted to the hospital for closer attention.

“I think that’s the turning point and sort of where I found myself just desperate for help in figuring out not just my physical symptoms, but also how to have the best quality of life and to make goals that were reachable and that weren’t going to put my health and my life at risk,” said Aly.

Palliative care is specialized medical care for people with serious illnesses. It focuses on providing relief from the symptoms, pain and stress of a serious illness. The goal is to improve the quality of life of both the patient and the family.

Aly met with Dr. Rebecca Benson, Medical Director of the Pain and Palliative Care Program at the University of Iowa Stead Children’s Hospital. Dr. Benson’s team sees over 200 young patents a year with varying illnesses including genetic and neurological disorders, cancer, heart and lung conditions and many others.

The first thing they discussed with Aly was her disappointment in not being able to live the life the way she had wanted.

“I think it was very frustrating to her to not be able to succeed in the ways that she had previously been able to succeed,” said Dr. Benson. “Having to drop a class because she’d been hospitalized and couldn’t make it to the class was a major frustration and a major loss for her,” she added.

Although Aly was initially hesitant to join the first meeting because she had been constantly seeing new specialists, Aly felt that she was supported immediately. Having a team that took the time to gain a full understanding of both her symptoms and her frustrations made a difference.

“It started with feeling like I was being listened to,” said Aly. “They let me finish everything I wanted to say before reacting to it, and I think what really made it hopeful was that I finally felt very affirmed.”

In addition to providing support for the depression and anxiety that stemmed from her illness, the team helped Aly find additional outlets for her stress. She began seeing the team’s chaplain to discuss spiritual matters and also worked with a musical therapist to express her emotions through song. These approaches had an immediate effect on Aly’s well being.

“It was the first time in a long time that I felt that there was any hope or any chance of making things better or finding a way to deal with my illness to the best of my ability,” said Aly.

With the lines of communication open and with a level of trust established, Dr. Benson’s team got to work on managing Aly’s physical symptoms. A key element of her pain management was helping her understand how articulate the ailments to her other professionals. Serving as a mediator between different specialists is a common role for palliative care teams, but for Aly, whose diagnoses have changed over the years, this was essential.

“I think palliative care gave me that voice because I needed that. Whatever I said, they had my back,” said Aly.

Dr. Benson also helped Aly set goals for herself—both short term and long term—so that she was still able to participate in social activities and attend band marches and performances.

In between returning to classes when she could, Aly would need to be admitted back into the hospital periodically when her symptoms were troubling her. All the way through, palliative care was there to support her. As the months and years progressed, a more robust pain plan and some additional support to assist her in advocating for herself were helping, but with a chronic illness, there’s always more work to be done. The emotional toll a serious illness takes on a patient can be difficult to overcome. Aly still works with the palliative care team to focus on taking small steps forward.

“The ultimate goal is to get physically better, but that can’t be true if you’re not emotionally and psychologically at a place where you can make those goals and improve each day,” said Aly.

Today, Aly is still focused on a quality life. 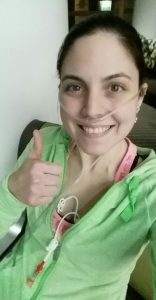 Aly is still the go-getter she was as a kid despite her illnesses. Although her symptoms continue to keep her from enjoying all the activities she wishes to pursue, she enjoys spending quality time with friends and family and is still working towards her degree. Becoming an advocate for palliative care has also been an exciting new venture.

“I had to change what it is I could do to bring purpose to my life, and palliative care was a big part of that,” said Aly. “Dr. Benson helped me realize that I have something that I can share with the world.”

As Aly continues to live life to the best of her abilities, she is proud of the progress she has made thanks to palliative care.

“It’s all about trying to find those ways to make your life important. And palliative care has been huge in getting me to see those parts of my life and how important they are. Palliative care has helped me to feel like I can take control back from a situation I had no control over,” said Aly.